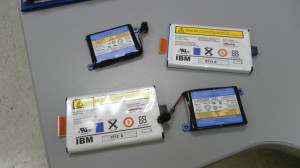 Over the weekend, I worked  with IBM to change the disk cache batteries on one of our Power 7 720 CBU machines running IBM i 6.1.

When the cache batteries on a Power 7 box get within 90 days of their expected end of life, the i operating system starts issuing alerts for battery replacement. You then have (roughly) 90 days to work with IBM to get the batteries replaced.

The trick is to schedule cache battery replacement during a slow processing period because the replacement batteries are not charged when they are installed. IBM delivers uncharged batteries for safety reasons and regulatory requirements (mostly fear of explosion).

I first wrote about the charging issue in 2012 in an IT Jungle article. Since then, I’ve discovered that in certain situations you may not be able to change your batteries concurrently. 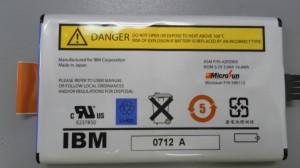 This is the cache battery that has to be installed in the CEC, which may force you to bring down the machine during a battery replacement

Read this article to see why you may need to power down your system to open the CEC cover.

So expect two sets of processing delays when changing cache batteries. One if you have to power down your box for installing batteries in the CEC. And a second delay while the batteries themselves charge after installation. 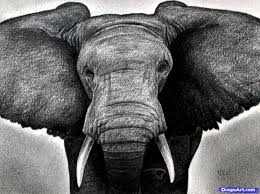 Joe is the owner of Hertvik Business Services, a service company providing written white papers, case studies, and other marketing content to computer industry companies. He is also a contributing editor for IT Jungle and has written the Admin Alert column for the past ten years. Follow Joe Hertvik on Twitter @JoeHertvik. Email Joe for a free quote on white papers, case studies, brochures, or other marketing materials.
View all posts by Joe Hertvik →
This entry was posted in Hardware, IBM i hardware maintenance and tagged cache batteries, IBM i disk cache batteries, IBM i hardware. Bookmark the permalink.