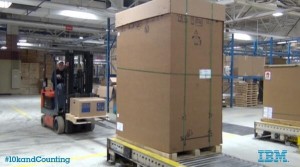 IBM promo picture on the #10Kandcounting campaign for PureSystems boxes. Picture from @IBMPureSystems tweet of 2-3-14

With IBM recently announcing that “IBM PureSystems family of expert integrated systems…have now shipped more than 10,000 units through the 4th Quarter of 2013, is this a significant number compared against the number of existing accounts and installations for the IBM i family (Power 4 and above)?

Here are my reasons for asking that question.

Playing with the numbers I get:

According to these numbers, the average number of shipped Power 7 IBM i machines and Puresystem machines is almost exactly the same: approximately 5,000 per year.

So just looking at these numbers, I have to ask myself the following questions:

1) If I compare the Power i standard (4,850/year) to the PureSystems standard (5,000 units a year and gaining momentum), do shipments of Power i boxes also look like a winner for IBM based on the PureSystems shipment standard of 5,000/year is good?

2) If I compare the PureSystems standard (5,000 units a year and gaining momentum) versus the Power i standard(4,850/year), do shipments of PureSystem boxes also look like a cause for concern when compared against Power i shipments?

Now, granted I’m simplifying here but my basic question still stands: is it is right to call PureSystems a success because it has 5,000 units a year shipped but we’re concerned about IBM i on Power systems because it’s only shipping 4,850 units a year. And vice versa.

There may be some very valid reasons these aren’t relevant questions, including the sheer number of nodes put out in a PureSystems installation, the cost of PureSystems boxes versus Power systems (the moolah factor), and the way the market is moving in server consolidation. Power systems boxes also can’t run Windows, which may be a factor. Tim Prickett Morgan has another excellent article on what’s in these 10K PureSystems installation out this week. There’s also the possibility I’m just misreading the numbers. But when I look at just the number of shipped servers (PureSystems and Power systems), I have to admit I’m a little confused as to where the dividing line is between successful server products and server products that we’re concerned about.

Maybe it will become clearer as we move along. For now, it’s an interesting thought experiment to play in the IBM i community, isn’t it?

I’d be curious as to anyone’s feedback on these ideas: where I’m all wet and where I might have a point.

Joe is the owner of Hertvik Business Services, a service company providing written white papers, case studies, and other marketing content to computer industry companies. He is also a contributing editor for IT Jungle and has written the Admin Alert column for the past ten years. Follow Joe Hertvik on Twitter @JoeHertvik. Email Joe for a free quote on white papers, case studies, brochures, or other marketing materials.
View all posts by Joe Hertvik →
This entry was posted in Hardware, IBM i acquisition, opinion and tagged ibm i, Power i hardware, PureSystems. Bookmark the permalink.