Will Opening the CEC Cover Turn Off Your Power 7 System? 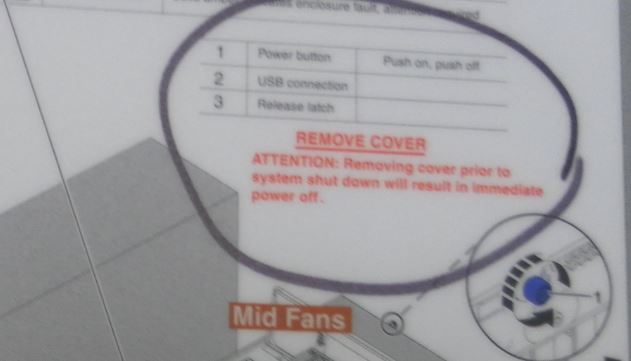 Be careful when you take the cover off your IBM Power 7 Central Electronics Complex unit (CEC, commonly pronounced “Keck”). You could accidentally turn off your entire Power 7 system.

On many Power 7 systems, there’s an interlock switch on the CEC. If you take the CEC cover off on one of these units without first shutting down all partitions and the Power system itself, the interlock switch will trigger and the entire system will power down immediately, possibly resulting in data corruption and other system issues. These units may also have a warning label on the CEC cover, such as the one shown above.

My IBM CE told me about this gotcha today as he was replacing some cache batteries in the CEC of one of our Power 7 720 CBUs. The tricky part is that according to my CE, some Power 7 machines have the interlock switch and others don’t. So it’s wise to check for both the warning label and verification from IBM on any interlock issues before planning your maintenance.

Another point to note. My CE and I found this warning on our 2.5 year old Power 7 720 machine, which is the most popular Power 7 system out there. So if we have this on our hardware, the interlock switch may also be present on a lot of other 720 machines, including yours (by some reports, Power 720s make up about 80% of all Power 7 machines).

So if you’re going to open the CEC for concurrent maintenance while the system is running, first check to see if there’s a power down warning on your CEC cover. If you see this message, you’ll need to power down all your partitions as well as the Power system before doing any CEC maintenance. You may also want to ask IBM to check whether your unit has an interlock switch before planning your maintenance.

Joe is the owner of Hertvik Business Services, a service company providing written white papers, case studies, and other marketing content to computer industry companies. He is also a contributing editor for IT Jungle and has written the Admin Alert column for the past ten years. Follow Joe Hertvik on Twitter @JoeHertvik. Email Joe for a free quote on white papers, case studies, brochures, or other marketing materials.
View all posts by Joe Hertvik →
This entry was posted in Hardware, IBM i hardware maintenance, IBM i Tech Info and tagged cec, ibm, power 7, turn off. Bookmark the permalink.