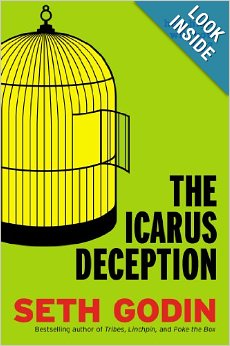 The Icarus Deception is a decent book about Seth Godin’s perceived end of the industrial economy and how the future will belong to those who make more direct connections and focus on their “art” rather than fitting in and becoming an industrial cog.

It’s oddly inspirational and I recommend you listen to it first before reading it. I liked it so much, I listened to it twice.

Godin really rails against the way things are traditionally done where you vie for a job, work hard to fit in, and pretty much do what they tell you to do. I particularly like his idea of making art as work and as opposed to a lot of other books, he doesn’t romance the idea of doing what you love. Rather than telling you that if you love what you’re doing it’s easy, he constantly stresses that no, doing your “art” is hard but it’s worth doing.

The whole ideas seems to be “Make More Art”, even when you fail, when you’re criticized, when things fall apart, etc. His central idea seems to be that if you make your work your art and do only those things that you can do and make connections, that’s the way to find your niche in this world where the old “industrial economy” is falling apart. His answer to almost any problem with finding your way is “Make More Art” and it’s almost a mantra in his book.

A lot of it reads like a screed or revolutionary track against doing business the traditional way and fitting in the way you’re supposed. There’s a lot of “they tell you this but…” in here and it gives a kind of lumpy rhythm to the book. But I think he’s got a decent message here and some good food for thought. 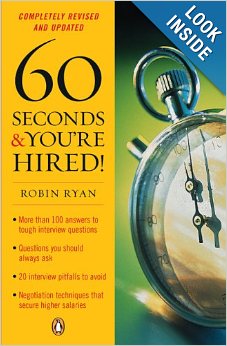 In contrast, I popped 60 Seconds and You’re Hired by Robin Ryan into my speakers after finishing Godin’s and it’s a jarring contrast. Ryan seems to be the anti-Godin and her message was telling me the exact opposite of what Godin was saying. Listening to the way she describes “getting” a job sounds pretty standard industrial economy, she’s almost like one of Godin’s cautionary tales or a spokesperson for entrance into the industrial world Godin is disparaging.

Anyhow, I liked The Icarus Deception and recommend it as food for thought (not something you must follow) for anyone trying to figure out where to go with their life. I’m still listening to Ryan’s book but it seems like a good resource for trying to get a job and she serves as a good counter-point to Godin. Not sure if I recommend Ryan’s Book yet.

Joe is the owner of Hertvik Business Services, a service company providing written white papers, case studies, and other marketing content to computer industry companies. He is also a contributing editor for IT Jungle and has written the Admin Alert column for the past ten years. Follow Joe Hertvik on Twitter @JoeHertvik. Email Joe for a free quote on white papers, case studies, brochures, or other marketing materials.
View all posts by Joe Hertvik →
This entry was posted in books, opinion and tagged books. Bookmark the permalink.